Malaysia is a fantastic country with unique characteristics and activities. The people of Malaysia love each other and often work together. This is made possible by their great culture, which enables them to appreciate each other, and includes sports which contribute to a significant part of their togetherness. Most of these sports are international and familiar to most. There are also some unique sports which are mostly played in Malaysia. Some of these sports might not be familiar to everyone. Here are some of these exceptional sports which are uniquely played in Malaysia. 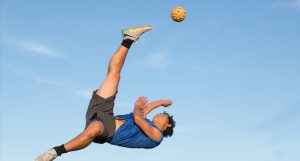 This is more of an aerial game. The sport originated in Malaysia. It is played on a rectangular court measuring 13.4m by 6.1m. This Asian game is played by two teams, with each team consisting of three players. It is played using a ball made up of synthetic material. This sport is similar to normal volleyball except that players cannot use their hands to handle the ball. Players are only allowed to use their knees, head, feet or chest in playing the game. This interesting sport has still not been introduced in the Olympics.

This is a traditional game in Malaysia. This sport is more Indonesian than Malaysian. It falls under the martial arts category. This game is not as aggressive as the usual martial arts as it only involves the natural movement of the body. This sport can be practised for a person’s own fitness or for the purpose of a competition.

This game is a combination of both dance and sport. It is played in a circle consisting of six players. Players are expected to perform their dances as they try their best to maintain the ball in the air. It is interesting to watch the players perform very complex moves. Malaysia has one of the best teams in this game.